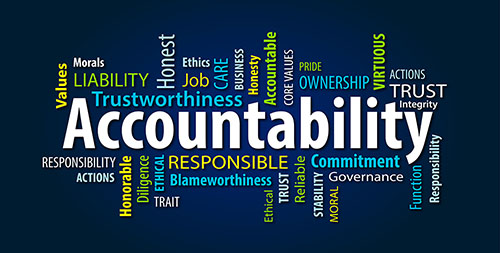 Before October 2017, I was inconsistent with my blogging. I wanted to write more frequently but always seemed to come up with reasons why I couldn’t do so. I had good intentions but those only went as far as the thought. My actions told a different story.

In October though, I made a decision that changed my blogging forever. I asked a writer friend, Ernest, to keep me accountable to post every week on Sunday by 3:00pm. He agreed, but warned me that he is very strict and would “divorce” the commitment if I didn’t post three times in a row. I agreed to his terms and the journey begun. The first few weeks were easy because I was fired up…and then it started becoming increasingly hard to make the time commitment. It was either that some work or meeting came up or that I had internet issues etc. They were all genuine reasons. However, on one beautiful and sunny Sunday in early December, Ernest told me to either clean up my act or choose a different act. He recounted something his first boss told him when he kept giving excuses for not meeting deliverables.

Ernest suggested I choose a different time to post if that time didn’t work for me. At that point, I could have chosen to look for an easier/more convenient way out but I insisted that I could still make 3:00pm.

“What do I do if you fail to keep your chosen time?” he asked.

I smelt that trick question a mile a way. I replied by saying that if I did not meet 3:00pm consecutively for the next three weeks, he had every right to walk away.

My circumstances did not change; my work patterns and general schedule remained the same and in some cases even got worse. However, I was on a mission. I thought to myself, I couldn’t afford to lose the grand opportunity I had to have a good accountability person. More importantly, writing is really important to me and I desire growth in it. So I wrote and posted by 3:00pm each of the next three weeks. I wish I could say that every week after that has been perfect but I can’t. However, I can say that my two late posts were both before 3:30pm. The rest have been by or before 3:00pm since that discussion in December. That is a record for me!

The concept of accountability people is one that is easy to avoid because of the perception that they will be like those annoying teachers breathing down your neck and asking why you did not do a, b, c, d and e. Accountability comes with a perception of laws and rules that will bind. This couldn’t be further from the truth though. Having people you are accountable to is healthy.

Accountability systems are inevitable requirements for progress to happen.

“You can not audit yourself,” my brother Caesar once told me, with reference to financial management within business. This rings so true beyond financial auditing though. You simply cannot be your own auditor. A third party must give an objective and neutral assessment for you.

Accountability systems enable you to consistently practice good habits. Good habits build up over time and compound to great successes.

In addition to this, these systems help you build and grow the area you are focusing on. You can improve a craft or improve a venture.

Finally, and most importantly, accountability systems teach you to honour your own word. When you say you are going to do something and you do it, you reinforce your belief in your ability to get things done. You build character and trust in you. Achieving whets your appetite for more growth and more success in different areas. It’s like the ripple effect when a stone is thrown in a still pool of water.

I hope you choose to make that difference.

P.s. Ernest is a super amazing and funny writer. His blog is www.silliedance.com .